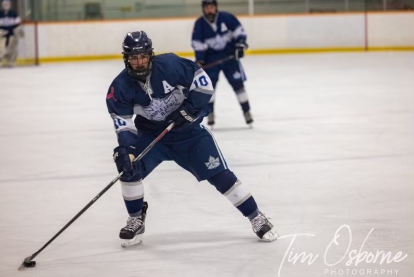 A returning member of the MLAC U18 AAA roster in the AEHL, Jack Clarke is a core leader & producer for the team. A prospect loaded with promise, Jack brings an elite level of skill and finesse to the ice each time out. In his last full season, he posted a truly impressive 22 goals, 48 assists and 70 points over 37 games played. He’s a constant threat with the puck, due to his playmaking vision, lethal release and next-level IQ & understanding of the game.

What really separates Jack is how well he sees the ice and his ability to draw defenders to him. Without a doubt, one of the best playmakers in Alberta, Jack constantly is opening up defensive schemes with how efficient he moves the puck. Not the largest player, Jack makes up for hit with elusiveness, speed, edge work and awareness very few players possess. The 2004-born forward is going to bring an immediate offensive impact to any Junior roster, and his leadership in the locker room make him a rare prospect in all aspects. A very driven young man, Jack is locked into his goal of reaching Division 1 hockey in the NCAA. With standout professionalism, great academic habits and character traits that can’t be tough, Jack brings the full package as a student athlete and will be special to watch heading into 2022-23.