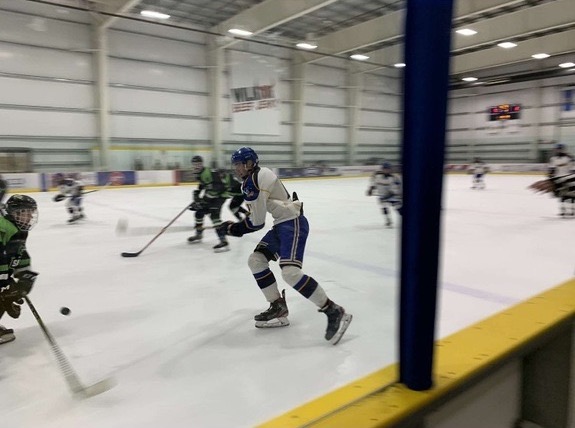 Tell us about your hometown, family and hobbies. How did you originally begin playing hockey (what age as well) and what is your favorite memory from when you were younger?.

I grew up about 2 hours north of Edmonton in the small town of Barrhead Alberta. My family and I ran a few hundred heads of cattle, and I began playing hockey to get me out of the house at around 7 or 8 years old. Then in late 2016, we moved to Leduc Alberta and I started rodeoing in the summers as a hobby. As for a favorite memory in hockey, I’ll be completely honest. It’s not winning something or scoring a goal but rather when I got put into the newspaper in Barrhead for having an exceptional season as a second-year novice.

Who is your favorite NHL player and who do you model your game after? Why?

My favorite NHL player isn’t some superstar or hockey legend, but rather Zack Kassian. Again being honest I love how he plays when he’s on top of his game, I would argue the volatility he brings with speed and physicality has been crucial at times for the oilers. Though for who I model my game after I would have to say Moritz Seider. His ability to utilize his size to protect the puck and create plays with the time and space he finds is something I strive for every time I step on the ice. As well as that I would love to have a fraction of the footwork Cale Makar does, his ability to evade and explode from the blue line and in his own end is revolutionizing the defensive game in my opinion.

Last season I played for the Midget AA Leduc Roughnecks, I will admit it was rough for us. First time coaches and players brought in from all over after the pandemic caused many to quit the game provided us with a multitude of challenges. We fought those challenges all year, but at the end of the year in the playoffs, going in as the 7th seed, we managed to find a way to overcome the difficulties. We managed to beat the first seed team in our series and claw our way into the 4th spot overall. They may have only taken the top 2 teams for provincials but seeing our team unify and feed off each other as we made the run of the season was something I won’t forget.

What are your top goals as a student athlete? Why are they your top goals? How important is school from your perspective? Why is it that way?

Schooling was also a major part of my 2021-2022 winter. It being my graduating year put a little more pressure on me to succeed in my studies. I have held an above honors G.P.A since grade 7 and want to finish strong with diplomas coming up soon. I know how I performed in this last year will have a major influence on my future options and I like to keep my doors open.

As for playing at the pro or NCAA level, I haven’t really even come to terms with that being a viable option. I have always aspired to pay my way through secondary school with hockey, and to have that dream become a possibility is surreal in a sense. Obtaining that goal won’t be easy though, and improvements must be consistently made to have any hope of reaching it. Most people focus on the big things they can do, ice time, working out, or any other substantial factor of our game today. But I feel finding little aspects of your everyday life is what can separate you from the majority. Sleep schedules, mental strength, being humble and understanding.

As an individual, I believe I am separated by an ability to lead and cooperate with others while setting an example by giving everything I got when I can. I live my life by the saying “no regrets”, and at the end of the day, I look back and regret I didn’t perform to the best of my abilities. I know there are improvements and adjustments that must be made. That same motto is what fuels me to keep getting better, to go to the gym, that extra skate, or whatever it takes. Because I know at the end of the day if I didn’t do it I will regret it, and I hate having to regret it.

Personality can determine a lot in today’s game, the tools are all there, and it’s the commitment and responsibility you have to capitalize that excels you. I hope that my work ethic and commitment to being my best can influence others

To finish it off with one fun fact about myself, my favorite two movies are Sicario and No country for old men. I don’t know what it is about them but every time I put them on for background noise while doing chores around the house I find myself sitting down locked in watching the whole film. Every time I always find a new thing I hadn’t appreciated about it the last time I watched it.